The Life and Diet of Phil Heath

by Admin
in Athletes, Motivational, Supplements
0

The sports industry always has a fresh crop of new motivated individuals that are desperate to make their name. Few attain that stardom position and very few who still consider that as an option. Most give up as they consider the possibility of being given another chance to rise at the top to be a futile prospect.

But for Phil Heath – those chances came again and again in spite of his initial failures of unsuccessfully competing for the top prize, he finally reigned supreme. The significance of his victories carries more weight because of the hardships that he faced earlier into his bodybuilding career.

When entering the bodybuilding industry in 2002, Phil Heath immediately gained notice due to his hard work ethic and determination to come out on top. So much that in three years, he competed and won the NPC USA Championship thus becoming eligible to compete in future pro bodybuilding events. Such an accomplishment three years after university is clearly the sign of an athlete unaware of the word failure, even if it came in some quantity later in his subtle yet glorified career.

Fight To The Top

After his first win, a decade of competitions came by in which he competed but was always able to grapple at being second best. As much being one of the top three positions is compelling to being called successful, Phil never gave up hope and still fought to get his body into the perfect shape. There were some difficulties in terms of figure problems; in 2009, he suffered a stomach virus that lay out his dreams to compete at full form for the title of Mr. Olympia. 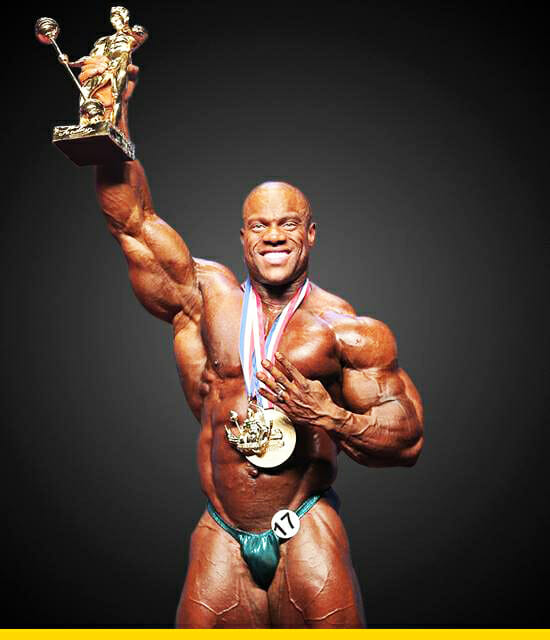 Any other bodybuilder or athlete once missing out on becoming Mr. Olympia would think twice before setting it as a goal but hot Heath. It seemed the same edge that was removing other athlete fro contemplating that they would ever achieve the top prize was actually driving his soul to attain it even more. Phil Heath gave everything left in his body to compete for the next two straight years for that title, even coming in second once, to finally become the Mr. Olympia in 2011.

Not only has Phil Heath strives for himself but has claimed this success as a responsibility to help others to have a better life if they so choose. He started his own line of supplements that are rich in nutrition and certified by top production companies. He has also released five DVD’s that have inspired many young bodybuilders to follow in his footsteps.